Mother Nature is always speaking. She speaks in a language understood within the peaceful mind of the sincere observer.

We had an unexpectedly beautiful day yesterday. Little Birdie (LB) woke very early, so it was a three-nap day. My husband and I wanted to enjoy our Saturday and decided the only way we could do something was to drive far enough away that LB could have a nap on the way there and another on the way back in the car. Therefore, the beach seemed a logical conclusion. We set off, looking forward to a nice lunch in a scenic location.

Unfortunately, we weren’t the only ones with such ideas. It was the first day of a long weekend and it seemed every man and his dog also wanted to take a nice little drive to the beach. The traffic jam started fairly early into our journey and neither of us relished being stuck in a car with a crying baby for hours. My husband swung into action and we decided to head out West into the countryside instead. We made a snap decision to visit a winery and lavender farm a bit over an hour from our house. It was an ideal length of time to give LB a short nap and get us to our destination in time for lunch.

As soon as I hopped out of the car at the winery, I felt waves of relaxation wash over me. My eyes soaked up visions of grape vines, rose bushes, rows of lavender, cattle grazing and the surrounding mountains. We were some of the first diners to arrive for lunch and were rewarded with a table in front of a large window with a spectacular view. It was hard to imagine the day getting much better.

Unfortunately, the restaurant did not have high chairs, so my husband had to pop back out to the car to get our pram. Since we were virtually on our own in the restaurant, I decided to take LB a little closer to the window to have a look outside. It was then that I saw her. A mother kangaroo was in amongst the rows of lavender gazing up at us, with a little joey in her pouch.

It was an amazing moment. Two mothers holding their babies gazing back at each other. She had soft brown eyes with long lashes and it amazed me that she didn’t seem uncomfortable that I had noticed her and try to hop away. It was as though we empathized with each other. I imagined her telling her joey to look at the mummy and the bubby in the window, just as I was telling LB to look at the kangaroo and her joey. 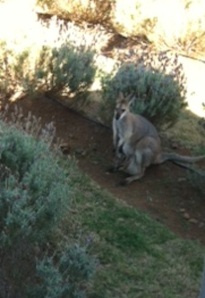 This little kangaroo and her joey were just outside the window as we ate lunch.

Soon, my husband returned with the pram and I motioned to him to come and have a look at the kangaroo. He came over, phone camera in hand. Then, as suddenly as the moment had come upon us, it was gone. My husband’s presence seemed to break the spell. The kangaroo looked more wary and I knew it was time to go back to the table and order lunch. However, the thoughts stayed with me, that feeling of a mother knowing another mother’s heart, an understanding of the love and commitment it takes to raise a little one, the curiosity about another mother’s experience and a feeling of mutual respect. It seems motherhood is a force of nature and it’s in more natural surroundings that you can appreciate why it is so.