Just as the tooth fairy takes away baby teeth, a nasty, hurtful little gremlin delivers them. My friend’s older sister introduced me to the term “tooth gremlin” and I think it’s very apt. Little Birdie (LB) doesn’t teeth well. When her first tooth came through, she made a mewing sound, similar to guinea pig, for about three days prior and then all hell broke loose for two days. So, when the mewing sound started again, I was ready for a couple of days of hell as the second tooth came through.

This time, I knew another tooth was coming, because all the signs were there. She bit me a couple of times during feeding, she started dribbling a bit more and I could feel a lump where the tooth was coming through. However, I thought I had dodged the gremlin this time, because there was no mewing. How wrong I was.

LB has been waking a little earlier each day this week and today it was just before five o’clock. I tried putting her back down after her feed, but she wasn’t having a bar of it. So, we launched off into our feed, play, sleep routine, ready to go for a nap just before seven in the morning. That seems a ridiculously early time to go for a nap, but it seems that is how a baby’s world works.

Sure enough, by half-past-six, LB was showing tired signs and was really quite grumpy. I changed her nappy, put her in her sleeping bag, read her a story, and gave her a hug and a kiss. That’s when I decided to act on a hunch and I put some teething gel on the spot where the new tooth was starting to break through just prior to putting her in the cot. LB seemed bemused by the gel as I put her in the cot, sang her “Twinkle, Twinkle” and wished her sweet dreams. However, that wasn’t the end of it.

After twenty minutes, I confirmed my hunch was right. LB wasn’t settling, even though she was clearly tired. I decided to abandon the comfort settling. I went in, picked her up, gave her some Panadol, a big hug and a rock in the rocking chair for a few minutes, then I put her back in the cot, sang “Twinkle, Twinkle” and wished her sweet dreams, before leaving the room. For once, I had a win. Within five minutes LB was asleep and slept for a further hour-and-a-half.

This teething thing is no biggie, right? Wrong.

We enjoyed a nice morning but after a couple of hours, I could see that LB was getting tired. It seemed ridiculous to be going for a second nap at half-past-ten in the morning, but LB was grizzling, yawning and rubbing her eyes. So, I went into my routine – nappy, sleeping bag, story, cuddle, twinkle – but it just wouldn’t work. I started the comfort settling techniques that I learnt at sleep school but that didn’t work either. After half an hour, I tried a cuddle and a rock in the rocking chair again. No luck. Poor LB screamed for another half an hour before she finally went to sleep. To her credit, she slept for two hours, giving me a chance to wash, sort and iron some clothes, then write this blog post. However, I really feel for her. Teething must really hurt, because it has such a profound affect on LB’s behavior. As I was doing the washing, I began to think of my “Top Tips for Surviving Teething”. I will list them below.

As I finish this post, it occurs to me that teething is like labour for another reason. Although different people experience labour pain in different ways, there is one common element. Eventually, labour ends. This is also true of teething. Eventually the tooth comes through. It might be painful, but it’s not life threatening. Just as you get a lovely little newborn after your labour, babies get a shiny new tooth after teething. As the old saying goes, what doesn’t kill us makes us stronger. Did you hear that Tooth Gremlin? I must admit, though, I am looking forward to a time when it’s the Tooth Fairy’s turn to visit instead! She’s much kinder than the gremlin. 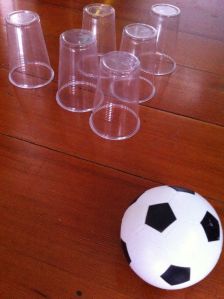 Apparently, I like a bit of a challenge, so when I recently came across a box set of fifty baby play ideas, I thought I would try to work through the whole box by Little Birdie’s (LB) first birthday. The first card I selected was “ball games”. The card said I should roll the ball to the baby, stand baby up and use her legs to “kick” the ball and line up paper cups, cardboard boxes or egg cartons to use as skittles.

To be truthful, the challenge is just as much for me as it is for LB. I want to keep putting in my best effort for her and this helps me to stay creative and enthusiastic, even when I’m feeling tired and a little stuck in a rut. I made sure I was prepared for the challenge by asking my husband to purchase a packet of disposable cups with the weekly groceries.  The cups he brought home were clear plastic, making me a little concerned about how LB would react to them. Would they seem like a target, even though they were clear? However, I pressed on regardless. I had visions of a giggling baby as we played our little game and my heart warmed at the thought of it.

I found a little mini soccer ball that we got with some sunscreen that we purchased recently at the beach and I set the cups up in a line. I sat LB a short distance away and rolled the ball to the cups. It was underwhelming. The ball just pushed the cup a little to the side. LB wasn’t even looking at the ball! I thought maybe we had progressed a bit too quickly, so I spent a few moments rolling the ball to her instead. She still really didn’t get it, preferring to suck on the ball, rather than having a go at rolling it back. I then decided to stand her up and swing her gently to “kick” the ball. Again, she wasn’t really interested. I decided it was time to give up.

When my husband came home, I told him about our little game and invited him to have a go with LB as well. That turned out to be the best idea I’d had all day. Ball games just come naturally to men. He arranged the cups in a diamond shape, like you would for 10 pin bowls and helped LB move her little leg to kick the ball. Finally, I heard the giggles I’d been waiting for.

We played with the game a few more times across the week. However, it turns out LB’s favourite occupation is sucking on the cups. Do I think it was a waste of time? Absolutely not. Both LB’s father and I had fun playing the game with her and she is starting to learn about balls rolling. Now it’s on to the next challenge.

The first card I drew was “Tickle Time”, which involved tickling your baby and playing “This Little Piggy”. We already do this quite regularly, so I’m drawing again. The next card I chose was to create a “Photo Gallery” for bubby. Sounds like a lot of work but I’m committed. LB doesn’t really look at the pictures yet when I read to her, so I wonder how she’ll respond to photos? I do show her the pictures I take of her on my phone and she smiles and she also likes looking at her reflection in the mirror. I have no idea if she knows she is looking at herself. This should make for an interesting challenge!

The medicine chest of the soul.

—   Inscription over the door of the Library at Thebes.

(Food for the soul.)

—   Inscription on the Berlin Royal Library.

A wonderful thing happened today. Little Birdie (LB) woke up really, really early. That doesn’t seem like a good thing when your baby is a poor sleeper. However, today it was a happy coincidence, because today is a day when some of the mummies from my mother’s group meet at a local library for “Rhyme Time”, a nursery rhyme session for babies.

LB and I used to attend this session every week, before we went to sleep school, but since then, I favour her morning nap over a morning at the library. LB still struggles with day naps and by the time I get her to sleep in the morning, “Rhyme Time” has started. Thus, there is often no library visit for us. In the past, LB has been somewhat ambivalent towards “Rhyme Time”, so I suspect missing it doesn’t bother her. She loves nursery rhymes, but as she has had a tendency to be so chronically overtired, the stress of the event meant she was a little surly or difficult to deal with during the sessions. I got hold of a copy of the run sheet for “Rhyme Time” and the two of us have our private session at home, which she loves, but that doesn’t help her learn about social situations.

I, on the other hand, love “Rhyme Time”. Not just because I am a bit of a performer (not really, OK … just a little) but because some of the other Mums from mother’s group go there and they are lovely. Just being around them lifts my spirit. Even when I existed on the thought of sleep alone, I would try my best to get to “Rhyme Time”, because I would always come home feeling so positive. The secret is that we go for coffee afterwards. We take over one of the local coffee shops, feed our babies, discuss our week and relax. The library is located in an excellent spot too, with easy parking, a good department store and some grocery stores nearby. One of the biggest attractions for me is the organic grocer. I swing in just before I go home and stock up on food for LB and my hair dye.

I am so grateful to my local library and their program for babies. It’s nothing grand, just a librarian singing some nursery rhymes out of tune while holding a teddy bear. However, it means the world to LB and I. It allowed me to get out of the house and connect with others when I was really struggling and I think LB has come to appreciate it too. For the first time, she was really smiling when I was picking her up and swinging her around today. As she grows older, I am sure we will spend lots more time in the library and I hope she will really come to love reading the books she borrows, just as I did growing up. It’s just another reason why you should love your local library. It seems libraries aren’t just places to house books, they are community hubs and mine is certainly helping me feel connected. Maybe you should see what your local library could offer you.